All boys from Year 7 to 12 are invited to attend the 2021 Music Muster on Monday, 1 February at lunch time in the Baynes Centre. Come along to meet music staff, hear about the music opportunities available and sign up for a music ensemble! You are all warmly invited to attend the inaugural Welcome to TGS Music Function on Sunday, 31 January at 4:00pm in the Pavilion. Come along to hear all about the extensive musical opportunities available at Toowoomba Grammar School and enjoy performances from the Vivace String Trio and the Grammarphones. 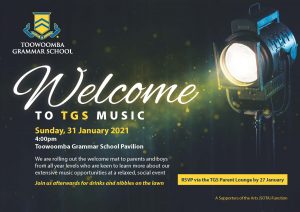 A hearty congratulations to the Senior School ensembles who participated in the 2020 Virtual Performing Arts Festival! Video footage was captured at the Welcome Back Concert in August and sent in to the judges for adjudication. For many boys, their performance at the Welcome Back Concert was their first performance of 2020. In fact, there were quite a few firsts on this evening: the first time many Year 7s have performed (in some cases it was their first ever performance), the first performance of the newly formed TGS Orchestra, conducted by Ms Teresa Brix, the first performance of the newly formed Little Big Band, the first time the Wind Ensemble was conducted by Mr Morgan Chalmers, the first time the RnB Too Band performed under the direction of Mr Peter Woods, and the first time the RnB Band performed under the direction of Ms Bonnie Green. The boys performed so professionally that none of these firsts would have been obvious to the audience or to the Virtual Festival judges! The resilience, passion, positivity and commitment of the staff and students in the Music Department shone brightly throughout 2020, and it is exciting that the performances at the Welcome Back Concert were rewarded with such outstanding results in the Toowoomba Virtual Secondary Performing Arts Festival. Congratulations!

The results are as follows: